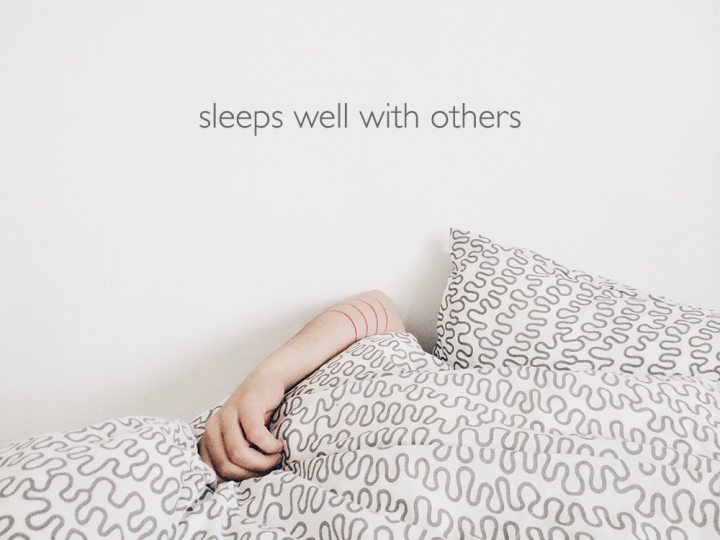 So I’m creeping through this first week of living here while my husband lives there. I know a lot of people have it way worse than I do (military families: mega props to you) but sleeping alone is unnatural to me. My body is hardwired to be in the presence of others when entering REM.

The first bed I remember my parents owning was a water bed, and the reason I remember their bed more than my own is because that’s where I spent the majority of my nights. As a toddler, my brother and I loved sloshing around as we rolled all over the bed, my mother frantically shooing us from their room as quickly as possible to keep us from popping it. I would sneak into my parents’ room and snuggle up between them during the night, comforted by their warmth and gentle breathing, their adult bodies surrounding me like a sleep fortress, gently rocking back and forth with the waves of the bed. I wish I could say I didn’t do this every night, but sleeping in my parents’ bed formulates the bulk of my childhood memories.

Mom and Dad finally nixed that habit (and greatly increased their sleep quality) when we moved to a new, super-big-to-a-six-year-old house in a quieter neighborhood. My brother and I were spooked by the long, dark hallways and paralyzed by the notion of sleeping upstairs by ourselves while my parents slept downstairs. They really laid down the law this time: now that we were older (five and six years old), we had to do what the other big kids do and sleep in our own beds. It was the first time my whole family didn’t sleep on the same floor, and while I don’t remember it very well, I’m sure tantrums were thrown at bedtime (better known to me as Quarantine).

The solution was to have my brother and I share a bed in his room, even though there was a perfectly good bed for me right next door. I’m not sure how long we shared a bed, but it was probably two years or so (before people thought it was mega creepy and incestuous). My poor mother had to read us the longest stories from our bookshelf before we’d let her go downstairs each night, and even then we didn’t go gently into the good night. We’d fall asleep watching static-interrupted reruns of JAG, since that was the only channel that came in on the rabbit-eared television upstairs, and eventually exhaustion consumed us.

Finally I moved out and took up residence fifteen feet north of my brother’s room, in a space I transformed My Room. As a teenager I relished the fact that I had My Bedroom, with My Clothes and My Blink-182 Posters and Pictures of My Friends, but it didn’t make going to sleep any better. I slept with approximately nine stuffed animals every night (today it’s only two, still from the original crew) and bolted to my bed every night as soon as I flicked off the light, convincing myself I was not afraid of the dark. I’d listen to music when falling asleep and took comfort in the sound of voices in the dark, pretending they were near me, talking to me, watching over me.

Unlike sleeping next to my brother, I remember my first time sleeping next to a boy and having everything feel different. We were on a camping trip with some friends and the five of us spent an hour skinning dipping in the warm water of Lake Michigan under the light of a veiled full moon. My body was covered in tiny goosebumps after swimming, chilled by the night air on my damp skin, and there was much ado about whom would sleep next to whom. The boy made it clear that I should sleep next to him, near the edge of the tent, and I nervously (excitedly) obeyed. Our sleeping bags lay side by side, zippers conspicuously facing one another until we ended up sharing one sleeping bag for the remainder of the night. In the darkness I felt the warmth of his gentle breath on my head and the rhythmic pulse of his breathing soothed me, the gravity of someone else’s body in my atmosphere making me heavy with sleep. I uncovered my childhood instinct of sleeping with other bodies, and there was no going back. We slept like this a few more times through the end of high school, though only when we could manage to sneak away from our parents. Then, like most high school relationships, it ended.

College wasn’t too difficult. Dorm life felt natural to me. Space sharing? Eating in a giant room with a gazillion other people? Sleeping with my head super-close to my best friend’s head? YES. YES, PLEASE. The hardest part was adjusting to sleeping up high on a lofted bed–careful not to hit my head on the ceiling every time I awoke–and sleeping in a twin-sized bed after spending my whole life on a full-sized mattress. I’ve only shared a twin-sized mattress with a few people (mostly platonic interactions), and it’s safe to say that I don’t recommend it unless you’re a side sleeper who loves waking up feeling like you slept in a sardine can. But, I still preferred the

On my fourth or fifth date with Sam, I should’ve known it was meant to be. I all but demanded that we go to the drive-in movie theatre to watch a double feature, then I promptly fell asleep and drooled all over him before the second movie even started. (I’m not a night owl. Bedtime is usually be 11 pm, all the time.) I’ve always felt that safe in his presence, and even though we’d known each other for hardly a month, I knew he wouldn’t take advantage of me and I didn’t feel self-conscious about my less-than-glamorous sleeping tendencies. That’s love, people.

I had roommates all throughout college, but during my senior year I spent most of my time visiting Sam and sharing a bed with him: someone I loved in a much different way than my parents, brother, the boy I camped with, and stuffed animals. Finally! Someone to cuddle with who cuddled back! Someone to talk with me as we fall asleep! Someone to share my dreams with as soon as I wake up! Someone to jot down all the things I say in my sleep and recite them to our friends! We fit so perfectly together when we sleep. He doesn’t mind if I make his arm numb and I don’t mind the way his body sort of jolts as he’s drifting off (though it did freak me out the first few nights we spent together). And so that’s how it’s been for the last five years or so.

Now, I sleep alone. It’s every kind of awful. I curl myself into a ball in the middle of the bed and try to coast gently to sleep, but it takes much longer to do without Sam next to me. I’ve also noticed that I wake up curled in a ball in the middle of the bed; I don’t think I move an inch the entire time I’m asleep. This is uncharacteristic of my usual sleeping habits, in which I attempt to invade every inch of the bed during the course of the night and usually wake up in my husband’s half of the bed. My system doesn’t quite know how to function these days. Most noticeably, I am continuously tired. I may be sleeping, but it doesn’t rejuvenate me.

I’ll have to adjust. I’ll see Sam every once in a while before I move to Chicago and live with him once more, but for the most part I’m on my own. (I should also mention that even though I wrote a guide on how to be alone, don’t cope with loneliness by filling your bed with whatever body is able and willing to occupy it. Big time mistake, folks.) Thank goodness I’ve still got two stuffed animals to keep me company.