Don’t forget to check out part 1 and part 2 of our westward road trip!

Adrenaline kept me upright for the first few hours the morning after listening to the bear (or whatever it was) battering away at a fellow camper’s food locker. I’ll still never know if it actually was a grizzly bear, but I couldn’t help but think about Paul’s warning that they had a grizzly that visited the campground.

As we inhaled our half-cooked hash browns and overcooked scrambled eggs at breakfast—they were warm and the air was a brisk 35 or 40 degrees—-we pondered our plan for the day. It was only a matter of time before my high-strung bear anxiety dissipated and I entered extreme sleep deprivation auto-pilot. If there’s one thing that I need, for my own sanity and the sanity of those around me, it’s at least six hours of sleep every night. I would be operating far under threshold today, and we were expecting a grueling day of hiking, exploring, and further altitude adjustment.

The thought lingering in the back of my mind was that I would need to do it all over again for at least two more nights. We were debating staying at our campsite two more nights for the eclipse, making it a total of 5 nights in Grand Teton instead of our planned three nights. There was a solid chance this could shape up to be one of the most miserable trips of my life if I had to stick out five nights sleeping in a tent with a grizzly visiting the campsite every night.

We packed up and headed towards the park. Our plan was to hike String Lake around to Jenny Lake and up towards Cascade Canyon. When we parked the car, applied our sunscreen, loaded our packs with food and water bottles, and were just about to hit the trail at 8:45 am, we noticed a vital element missing. The bear spray. Sam remembered seeing it in the tent since we kept it there last night as a precaution, and it must’ve still been there. After the events last night and all the warnings we’d heard, there was no way we were hiking without a can of bear spray.

Shifting gears, we drove to the ever-popular Jenny Lake parking area and visitor’s center. This is by far the most crowded and congested part of the entire park, and we were hoping to avoid it. But, when you need bear spray, you need bear spray.

We dropped $45 on a can of bear spray and got some advice from the park rangers. I can’t say enough good things about every park ranger I’ve ever met. They are always so helpful, informative, and encouraging. One of the rangers helped us adjust our route a little so we would get the most out of Cascade Canyon. Since some of the scenic routes around the lake were closed, she recommended taking the boat across Jenny Lake instead of hiking the rugged, gnarly horse trail. She also told us she’d never seen a grizzly in the park (most people think they’re seeing grizzlies but they’re actually seeing black bears), even though grizzlies are common in the backcountry. I felt slightly reassured. 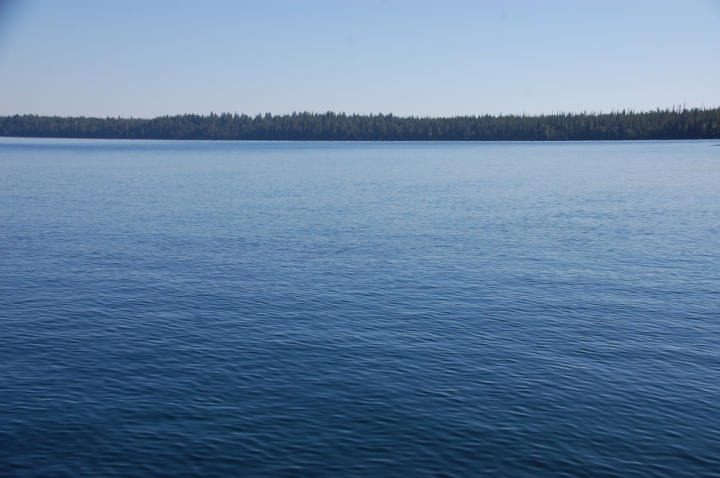 The boat ride across Jenny Lake was definitely worth it. It was a beautiful morning, the lake was calm, and the air was still cool. While I wasn’t keen on spending the cash on the boat ride, it saved us so much time so we could start getting to some of the scenic hikes; I would opt to take the boat again if we come back to Grand Teton.

Arriving safely on the far shore and departing the boat, we moved away from the crowds. The majority of people headed towards Hidden Falls, off to the left, but we went right towards Inspiration Point and the start of Cascade Canyon. The normal trail was closed for construction, so we hiked up a steep, rocky, and breath-snatching horse trail to Inspiration Point. Even though it was a cool morning, we quickly shed our long-sleeve shirts as we made the ascent through trees with trunks wider than my arm span. It was a lush, wild, and entrancing place. Grand Teton National Park was quickly stealing my forest-loving heart. 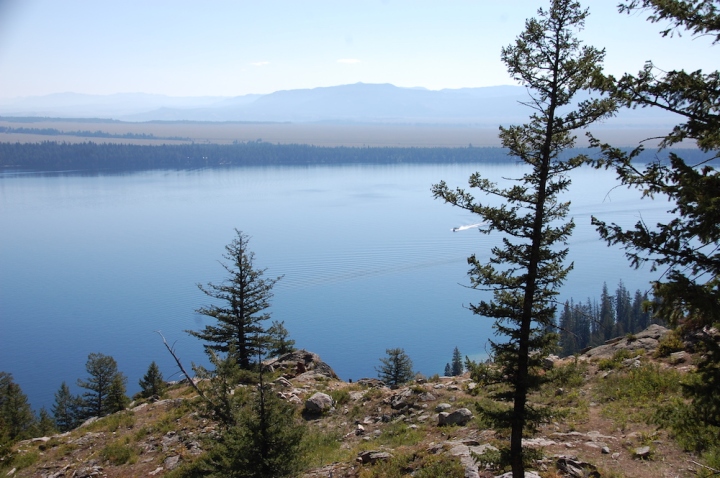 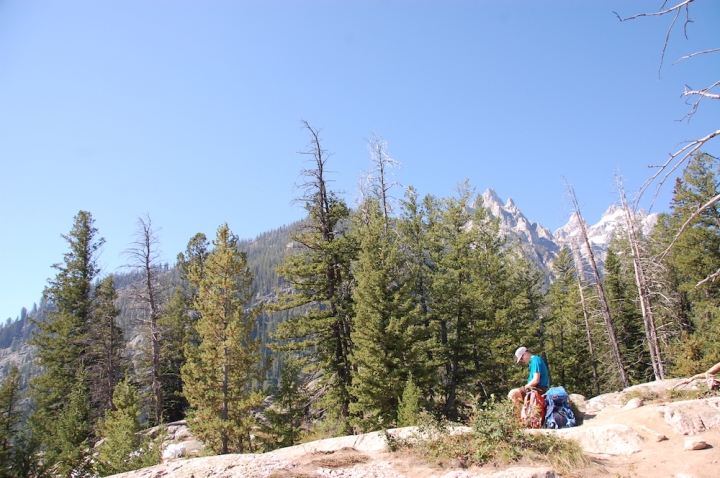 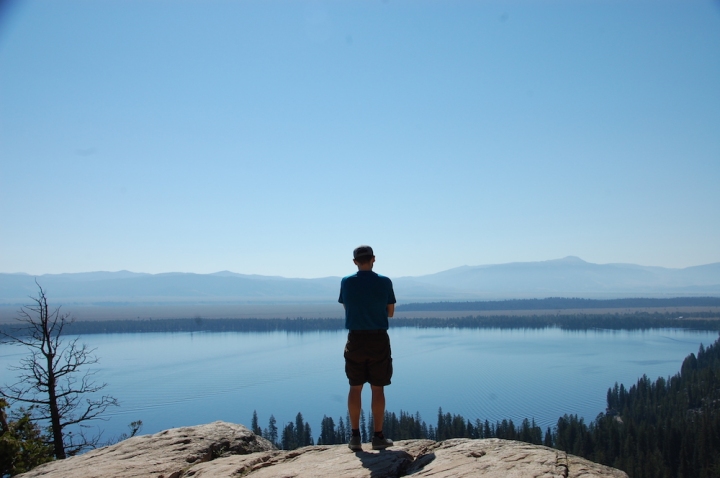 The view from Inspiration Point may not have been “inspirational,” but it was undoubtedly beautiful. Jenny Lake lay calm and undisturbed in the basin below the rocky outcrop on which we stood. Signal Mountain, which we climbed the day before, stood gloriously off in the east and catching the early sunlight. Directly behind us, masking the route we were about to take up Cascade Canyon, the Teton Range was towering above us and glimmering in the sun. It finally felt like we’d arrived.

The hike into Cascade Canyon followed a rushing river as we wound along granite boulder left behind by glaciers, massive fir and pine trees, and a bounty of wild raspberries. We couldn’t talk over the sound of the cold water pounding against the stone in the aggressive river rapids, but it didn’t matter. Somehow, it was perfect.

We made it into the canyon and hiked at a slow, gradual incline through the canyon and along the river. The trail ducked in and out of shade coverage and sunny openings, so there were plenty of views along the way. There were fewer people up here but still enough hikers around to make me feel safe from bears. Even though I felt safe, fatigue hit me hard and fast as we moved deeper into the canyon.

We stopped for lunch under some trees after we had hiked for about two hours. It was only four miles to the end of the canyon (our goal), so we figured we were getting close. I hoped the food would give me one energy to keep going, but I felt worse after lunch: my head was foggy, my eyes hurt, my body felt sluggish in every possible way. We trekked on far enough to see a bull moose eating in the river—so huge!—and chatted with another young couple about how hard it was to secure campsites this weekend. 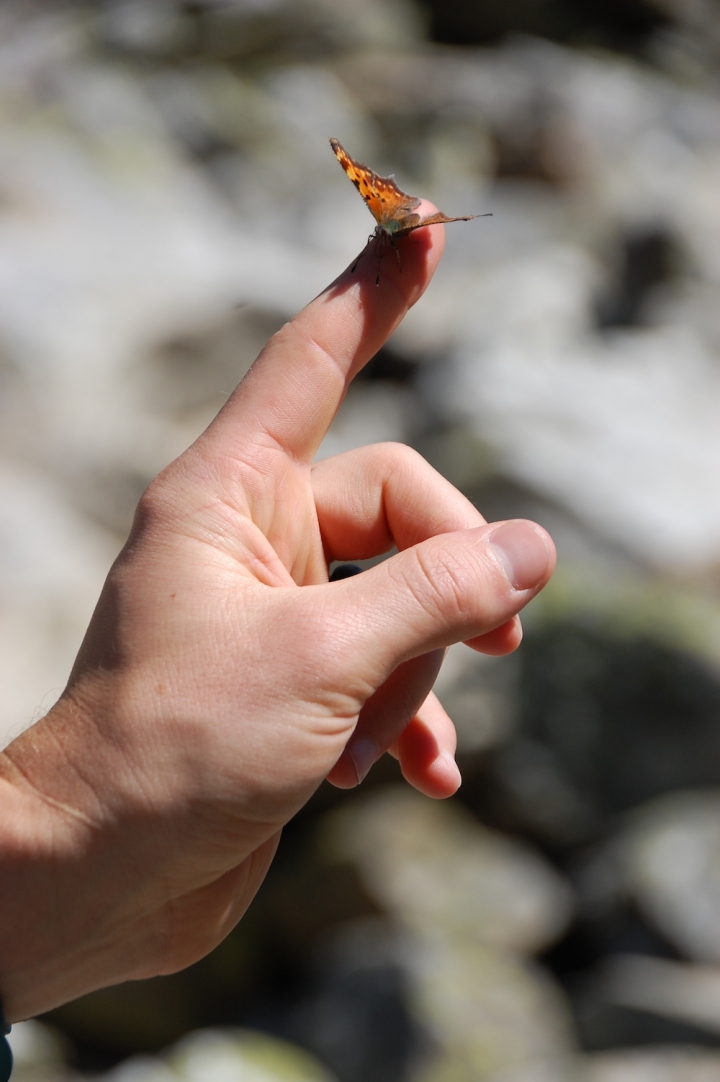 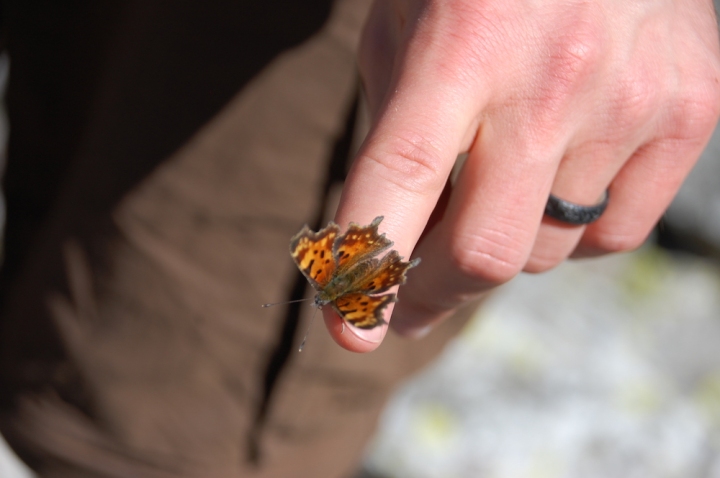 When we asked a few returning hikers how much further until the end, they all said it was probably another hour or maybe more. Sam and I looked at each other, confused: did we read a sign wrong? Was it really that far? We had gone three miles, probably farther, and the hike was only supposed to be 3.5 miles into the canyon before turning around.

I confessed to Sam that I didn’t think my body was capable of going further, especially knowing we had to come back all this way. The heat was picking up and my mind was fading. He agreed it wasn’t the best idea to proceed ahead in our (read: my) current state. We started heading back and missed out on the end of the canyon. 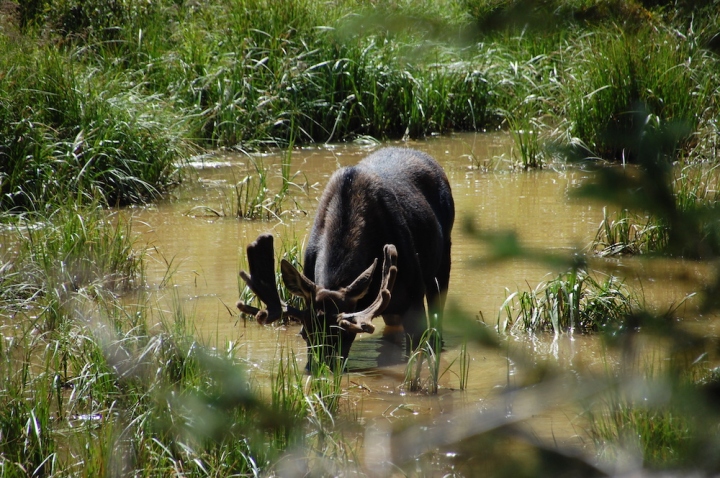 The walk back was easier because it slowly wound downhill to the lake. As we hiked, I told Sam I was going to sleep in the car that night because the tent wasn’t an option for me. Sam, being all the wiser and more willing to spend money, suggested we try to find alternative lodging.

After boating back across the lake, we checked at Signal Lodge to see if they had any rooms even though we knew it was a long shot. They didn’t have a room, but they did have some phone numbers for places in Jackson that may be able to help us out. We called around and found a place with a room for the next two nights that didn’t charge us what they easily could have given the eclipse hubbub, and we booked it right away. Instant relief filled my body and for a few moments I thought I would cry. I would blame the sleep deprivation, but let’s be real: I felt overwhelmed with joy.

With a hotel room in our future, we drove back to our campsite and packed up. We thanked Paul and Judy, the campsite hosts, for all their kindness. An hour later, we pulled into The Antler Inn in Jackson and unloaded our stuff into the room. An hour after that we were showered, fed, and trying to plan the next day’s activities before sleep overtook us.

When we finally did sleep, it was miraculous.